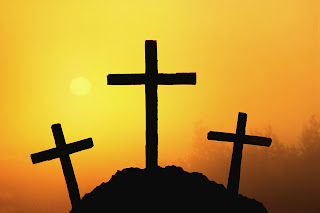 The city buzzed with sights and sounds of spring as the chatter of excited voices spoke of awaited Passover festivities. Branches and cloaks lined the road in anticipation of the king's foretold arrival. I was there.


I waved a palm branch as He humbly road past and on into the town.


"Hosanna! Blessed is He who comes in the name of the Lord!” I shouted with the crowd.

It was quite the triumphal entry for such a modest king who road in on donkey. However, just as He had told His disciples it would be, not everyone shared the same excitement and enthusiasm over His arrival. Threatened by His power, and fearing the people would overthrow them to follow the king, the chief priests, scribes and elders plotted ways to seize and kill Him.

On the first day of the festival, the gentle king called together His disciples for one last supper. It was their final meal together here on earth. I was there. As we reclined at the table, He spoke.


“Truly I tell you, one of you will betray me”, He said.
Surely You don't mean me, I scoffed.

After dinner, He and several of the other disciples retreated to a garden at the foot of the mountain. Though He pleaded with them to stay awake and keep guard, the disciples slept while He prayed. A while later, a large crowd armed with swords and clubs entered the garden. They had come to arrest Him. I was there.

Earning my keep from a deal I made with the chief priests, I kissed Him on the cheek and signaled to the mob the One to arrest. They bound Him and took Him away for trial.

During the festival, it was customary for the governor to release one prisoner chosen by the crowd. The chief priests and elders persuaded the crowd to have Barabbas, a known criminal, released. I was there.


“Then what shall I do with Him whom you call the King of the Jews?” the governor asked.

The One I hailed a few days earlier, I now condemned to die.

"Crucify Him! Crucify Him!" I shook my fists and shouted along with the crowd.

The soldiers took Him away. They beat Him and mocked Him. They spat on Him and placed a crown of thorns on His head. And then they took Him to Golgotha, Place of the Skull; and driving stakes into His hands and feet, they hung Him from the cross and crucified Him. I was there.


“For God made Christ, who never sinned, to be the offering for our sin,
so that we could be made right with God through Christ.” – 2 Corinthians 5:21 (NLT)

The humble king, who never sinned, hung on the cross for me. For you. Though I was not there in the flesh, it was for my sins He died. It was for your sins He died.

I was there.  We were all there.


“He was pierced for our transgressions, He was crushed for our iniquities;
the punishment that brought us peace was on Him, and by His wounds we are healed.”
- Isaiah 53:5 (NIV)

Heavenly Father, thank You for the sacrifice You made for me.  I cannot fathom the pain and agony You endured as my sin held You on that cross. Thank You for paying the price for my sins, so I may have eternal life with You. Thank You for the forgiveness and healing You give to all those who come seeking. I love You Lord. Thank You for loving me...despite it all.

Despite it All lyrics
© Angela Winterbower 2011

Posted by The Slickery Road at 9:46 PM